B-Town Couples Who Made Their Relationship Official On Diwali: Katrina-Vicky To Sushmita-Rohman Bollywood celebrities are known for their extravagant lifestyle, and they are under constant media glare for the same. Undoubtedly, celebrities’ love lives always remain one of the most interesting topics among gossipmongers, and they often connect the dots to find a love triangle. While some celebrity couples came out in public and declared their love for one another, others prefer to keep things under wraps.

Meanwhile, Diwali is one of the most-loved festivals in Tinseltown as many celebrities host a lavish Diwali bash, which is attended by the who’s who of the glamour world. There are many Bollywood celebrities who made their relationship official at extravagant Diwali parties and stole the limelight. So, here’s a curated list of some celebrity couples from B-Town, who chose Diwali to make their relationship official.

Also Read: Life Story Of Dara Singh: From Child Marriage To Unlucky In Love, The Wrestler Lived It All Hailed as one of the adorable couples in Tinseltown, Katrina Kaif and Vicky Kaushal are the epitome of couple goals. The duo prefers to keep their personal life low-key and being private people, they believe in hush-hush affairs. For the unversed, Katrina and Vicky had tied the knot on December 9, 2021, and since then, they have been enjoying their lives with each other to the fullest. The couple often shares glimpses of their happy married life on their respective IG handles. For the unversed, it was in 2019 when Vicky Kaushal and Katrina Kaif graced a Diwali bash together and sparked their dating rumours. They were spotted leaving the venue together but went in separate cars. For the bash, Katrina dazzled in a red-coloured lehenga from the designer, Sabyasachi Mukherjee, and Vicky looked dapper in a white-coloured kurta-pyjama. 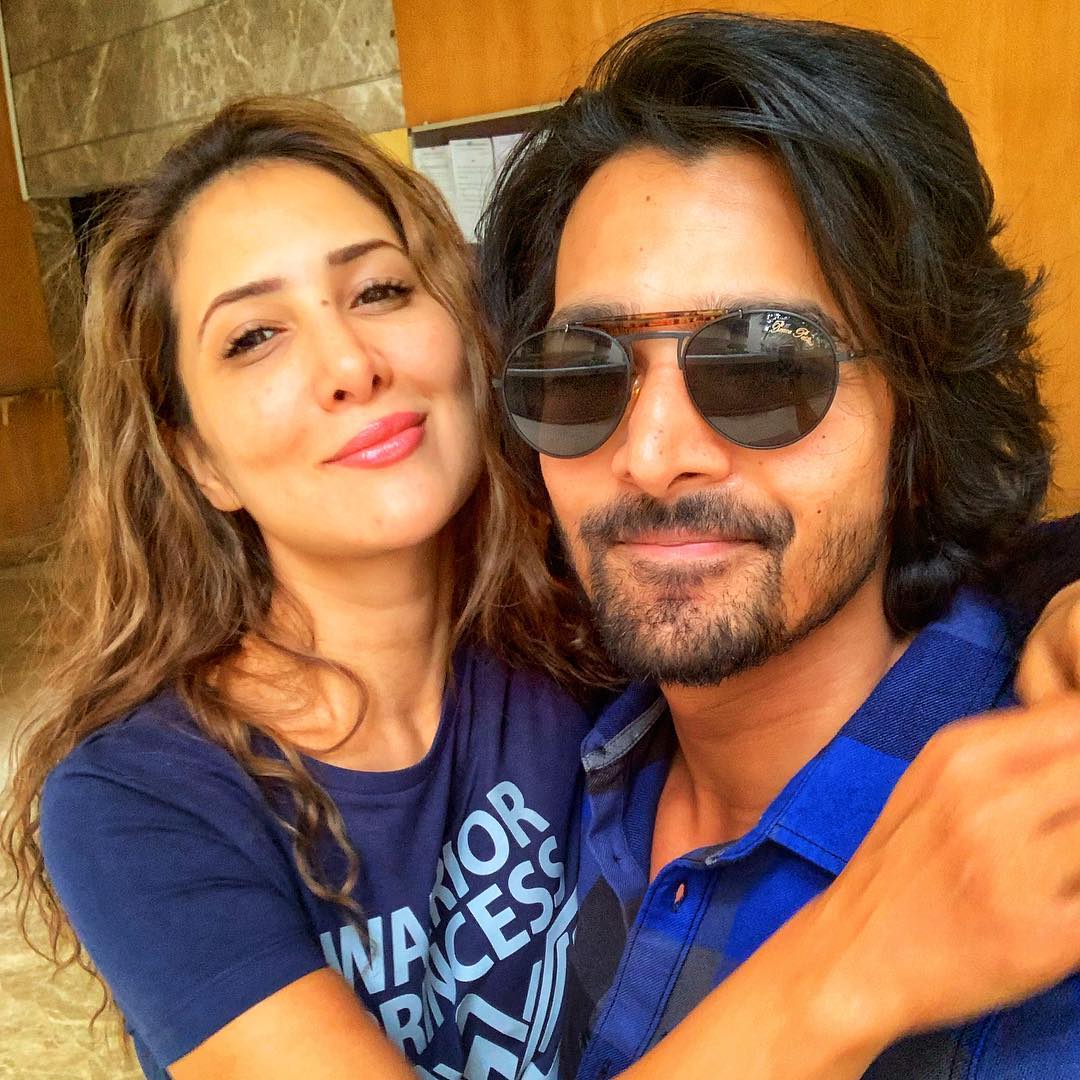 Bollywood actress, Kim Sharma is currently in a happy relationship with Tennis player, Leander Paes. However, she was once madly in love with actor, Harshvardhan Rane, and their love banter was the talk of the town. Kim had ended her previous marriage to businessman, Ali Punjabi, and after her divorce, she found love in the arms of Harshvardhan Rane, and the two never shied away from indulging in PDAs. However, Kim and Harsh parted ways in 2019. 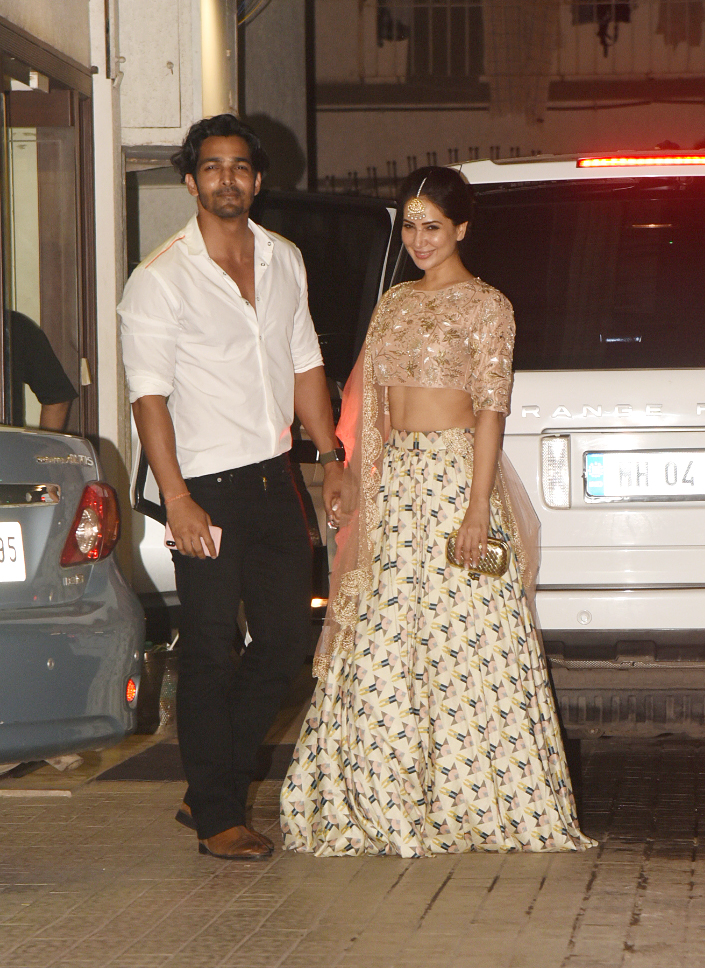 It was in the year 2017, when the rumours about Kim Sharma being in a relationship with Harshvardhan Rane started making their way into the headlines. Later in 2018, Harsh and Kim made a dazzling appearance at a Diwali bash hosted by a friend and garnered a lot of attention. The actress looked beautiful in a beige-coloured lehenga, while Harsh was seen clad in a white shirt and black pants. Bollywood actress, Sushmita Sen fell madly in love with the Noida-based model, Rohman Shawl, who was 15 years younger than her. The two were in a steady relationship for three years until they decided to part ways in December 2021. Over the years, Rohman became an integral part of Sushmita’s family, and he shares a beautiful relationship with her daughters, Renee and Alisah. Known for wearing her heart on her sleeves, Sushmita never missed a chance to shower love on Rohman, and she shares a great bond with him even after their separation. 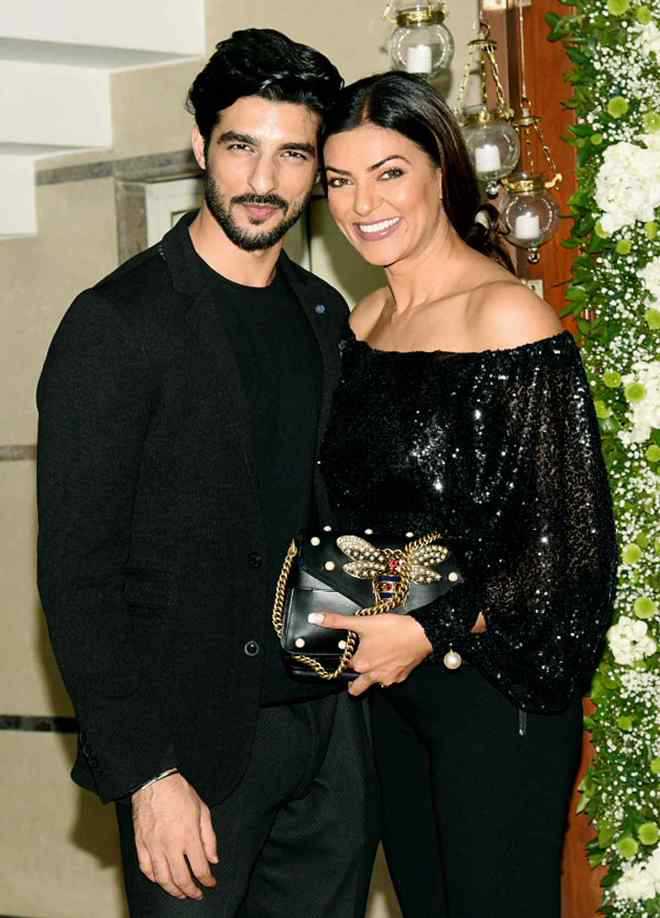 The stunning couple made an appearance together at Shilpa Shetty Kundra’s Diwali party in 2018 and made their relationship official. Twinning in all-black outfits, the couple looked great together and made heads turn with their chemistry. While Sushmita donned a black sequinned off-shoulder top with a pair of black pants, Rohman looked dapper in a black t-shirt, paired with a matching blazer and pants.

Actor-producer, Arbaaz Khan often leads the headlines for his personal life. He was previously married to actress, Malaika Arora, but the duo parted ways after 18 years of marital bliss. However, the ex-couple is co-parenting their son, Arhaan Khan. After his divorce, Arbaaz started his ‘happily ever after’ with model, Giorgia Andriani, and the couple often grabs the limelight with their public appearances and social media banter, 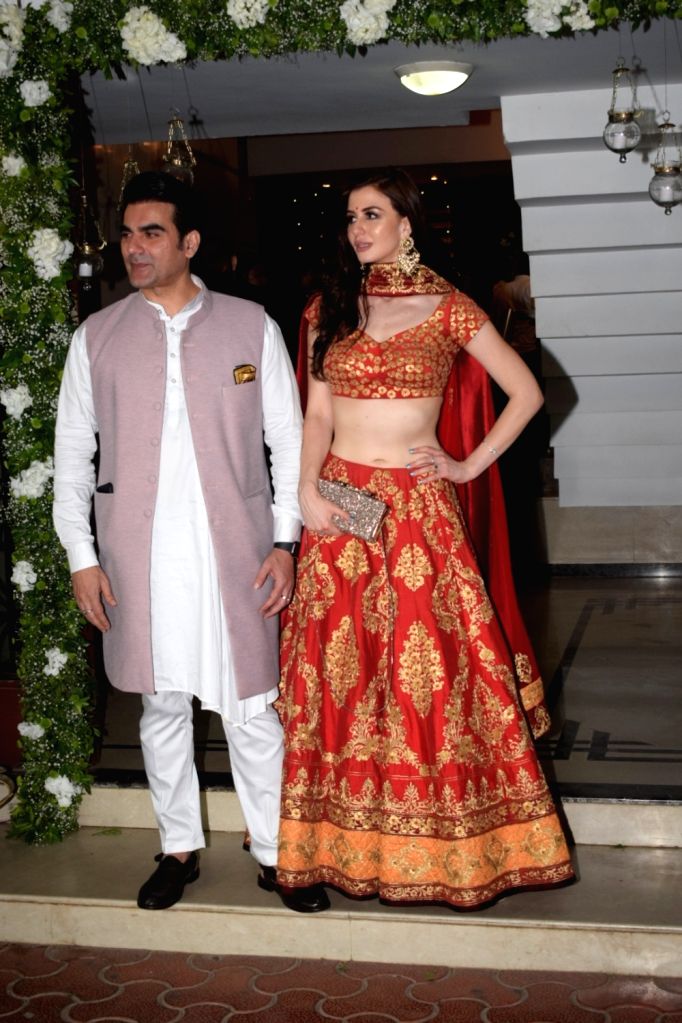 It was in 2018 when Arbaaz Khan and his alleged girlfriend, Giorgia Andriani, made their relationship official when they attended Shilpa Shetty’s Diwali bash together. In the pictures, Giorgia donned a red-hued embellished lehenga choli and completed her look with pair of statement earrings, a metallic sling bag and wavy tresses. Meanwhile, Arbaaz looked dapper in a white kurta-pyjama paired with a purple-hued long jacket. 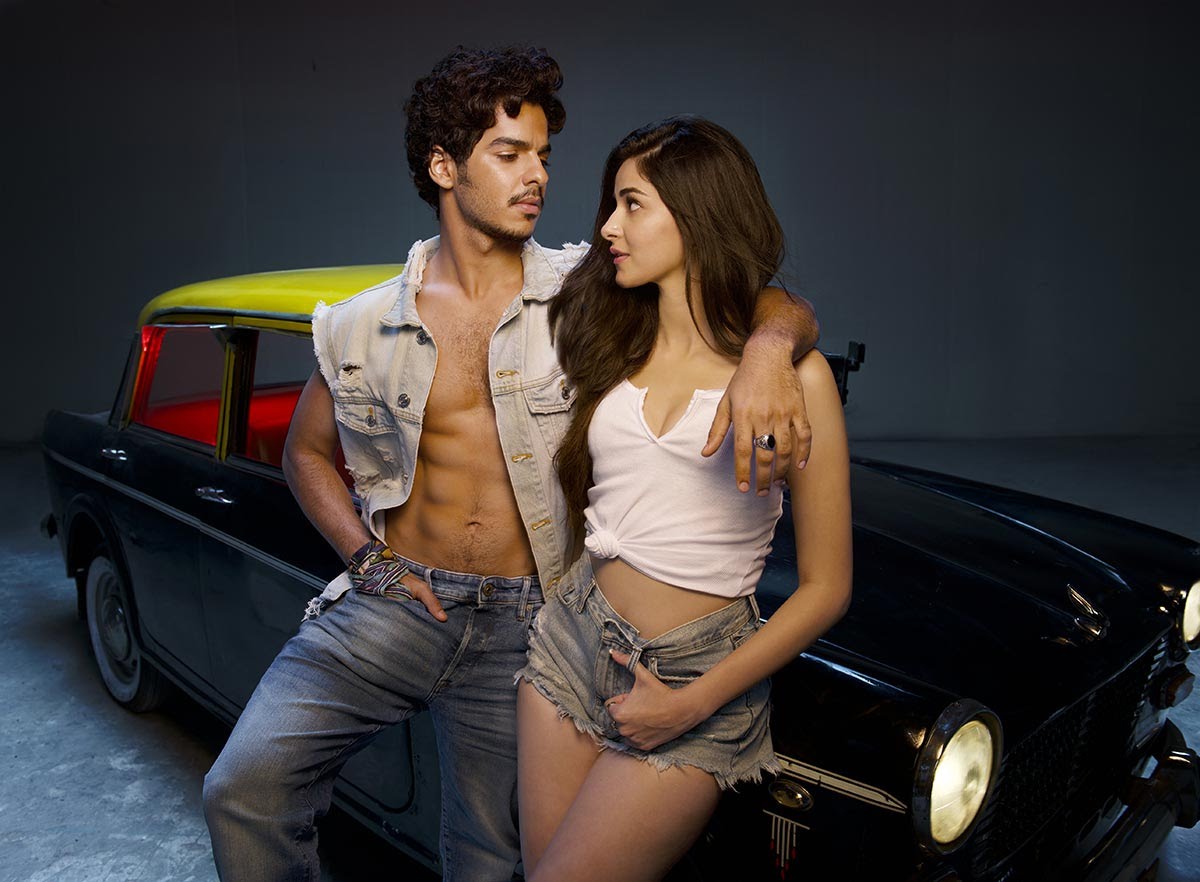 Bollywood actress, Ananya Panday and her Khaali Peeli co-star, Ishaan Khatter, were once rated as one of the most stunning celeb couples in Tinseltown. The duo was often spotted at parties together, and they often jetted off to unknown destinations for a romantic getaway. However, the buzz around their relationship grew stronger when Ananya Panday attended Ishaan Khatter’s brother, Shahid Kapoor’s birthday bash. However, soon, the news of their break up surfaced on the internet as the couple called it quits after dating for three years. While rumour mills were churning reports about Ananya and Ishaan’s relationship, the lovebirds fuelled the fire as they graced Aarti Shetty’s Diwali bash in 2021. Though the rumoured couple came in different cars, they celebrated the festival together. The couple won hearts with their panache, and their fans were super-excited to see them together. Ananya wore a white lehenga with golden embroidery and completed her look with heavy jhumkas and open tresses. On the other hand, Ishaan opted for a desi look wherein he was seen in a white kurta-pyjama. Popular actress, Tara Sutaria made her Bollywood debut with the film, Student of the Year 2, and became an internet sensation. The actress has been hitting the headlines for her rumoured relationship with Ranbir Kapoor’s cousin, Aadar Jain, for some time now. Though the lovebirds have not officially confirmed their relationship, their social media PDAs are proof of their brewing romance. Tara and Aadar often grab a lot of attention because of their mushy moments, and they never shy away from expressing their love and support for each other. 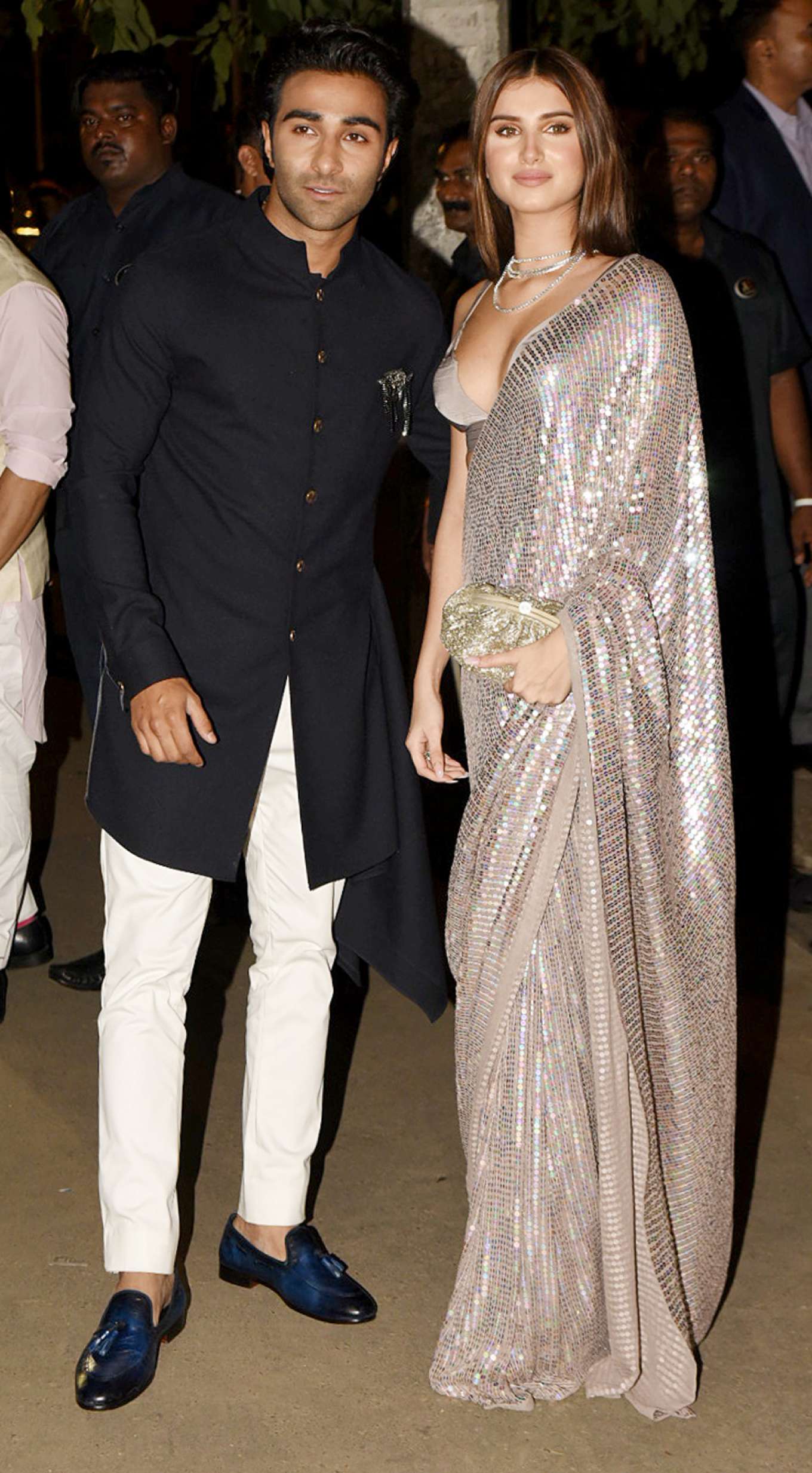 However, it was during their visit to Bachchan’s family Diwali bash that the adorable couple, Aadar Jain and Tara Sutaria stole the limelight with their appearance. The couple posed for the shutterbugs and flashed their brightest smiles, providing more fodder to gossipmongers. For the bash, while Tara looked stunning in a shimmery silver saree, Aadar donned a navy blue sherwani.

What do you think about these celebrity couples making their relationship official on the auspicious occasion of Diwali? Let us know.

Next Read: Star Kids Then Vs Now Pictures Showing Their Drastic Transformation: From Palak Tiwari To Aryan Khan