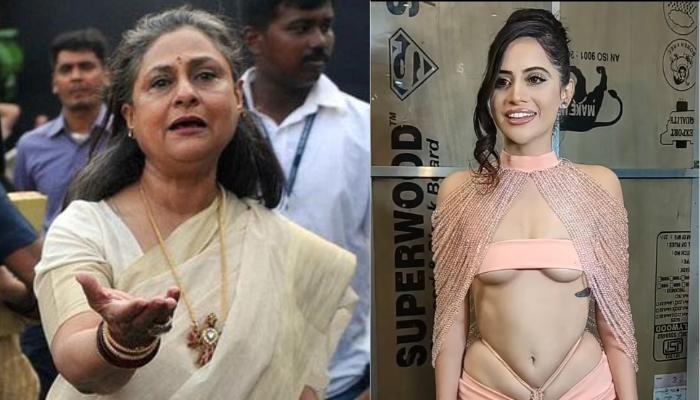 Urfi Javed is a paparazzi’s favourite actress, who rose to fame with her stint in Bigg Boss OTT. Since then, shutterbugs have not left a chance to follow Urfi to run behind her with their cameras on. She pays much respect to her photographer friends in the industry and is always seen greeting them with a broad smile, and sometimes she also lashes out at them when any of them try to comment on her short dresses.

This time, a video of Amitabh Bachchan’s wife, Jaya Bachchan, is doing rounds on the internet, in which the veteran actress was seen walking with her granddaughter, Navya Naveli Nanda. However, Jaya was seen making grumpy expressions towards the paps in the clip, and she also wished they ‘double and fall.’ As the video went viral, it irked many netizens, including the popular style icon, Urfi Javed.

Recommended Read: Debina Bonnerjee Shares What People’s Expectations For Her Delayed Family Planning Used To Do To Her

On October 18, 2022, Urfi Javed took to her Instagram handle and reposted Jaya Bachchan’s viral video in which she wished the paparazzi that they may fall while they were doing their job. Atop the video, she penned a note in favour of the shutterbugs and slammed Jaya Bachchan for her ill comments. She said may nobody becomes like Jaya and only rise, be it in front of the camera or behind the camera. She also mentioned that people don’t respect someone if they are old and powerful, but if they are nice to others. Check it out! 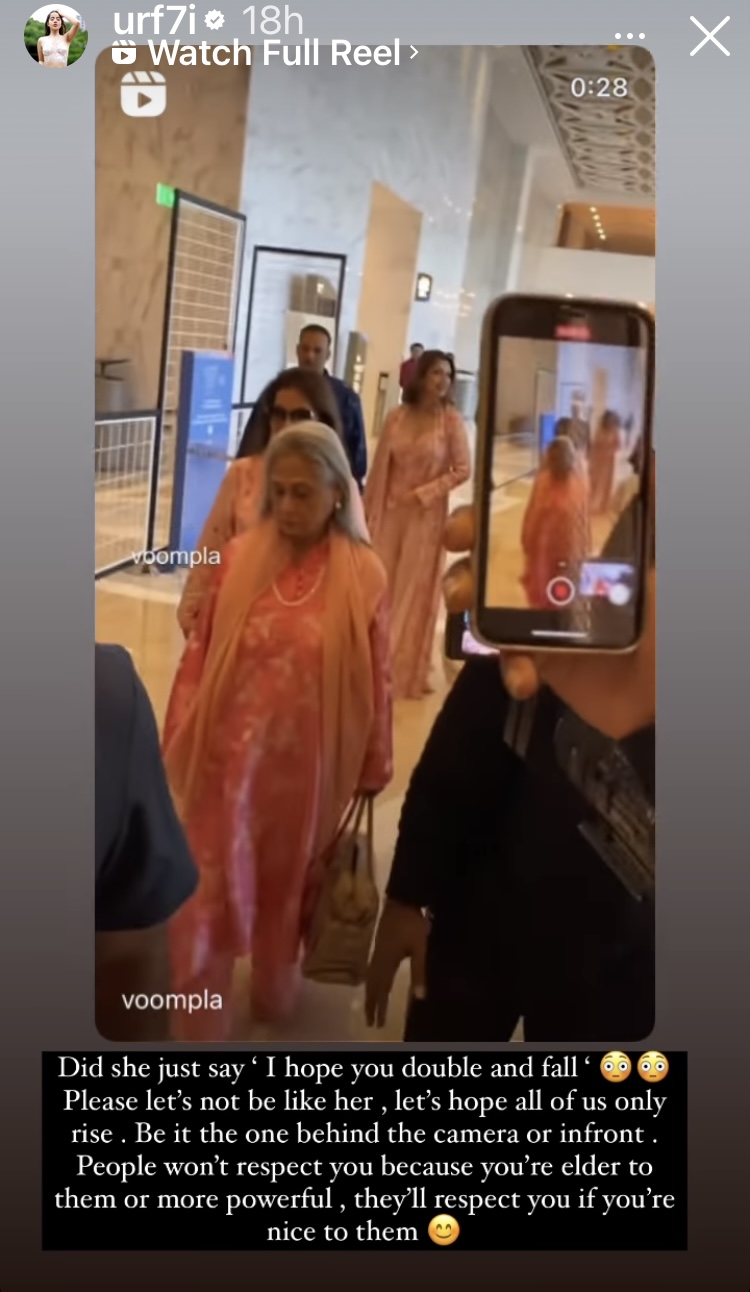 Not only this! She uploaded one more IG story, writing about her insecurities. Urfi added that she knows criticising powerful people in public may ruin her work opportunities, but she cannot stay quiet. Check out her post! 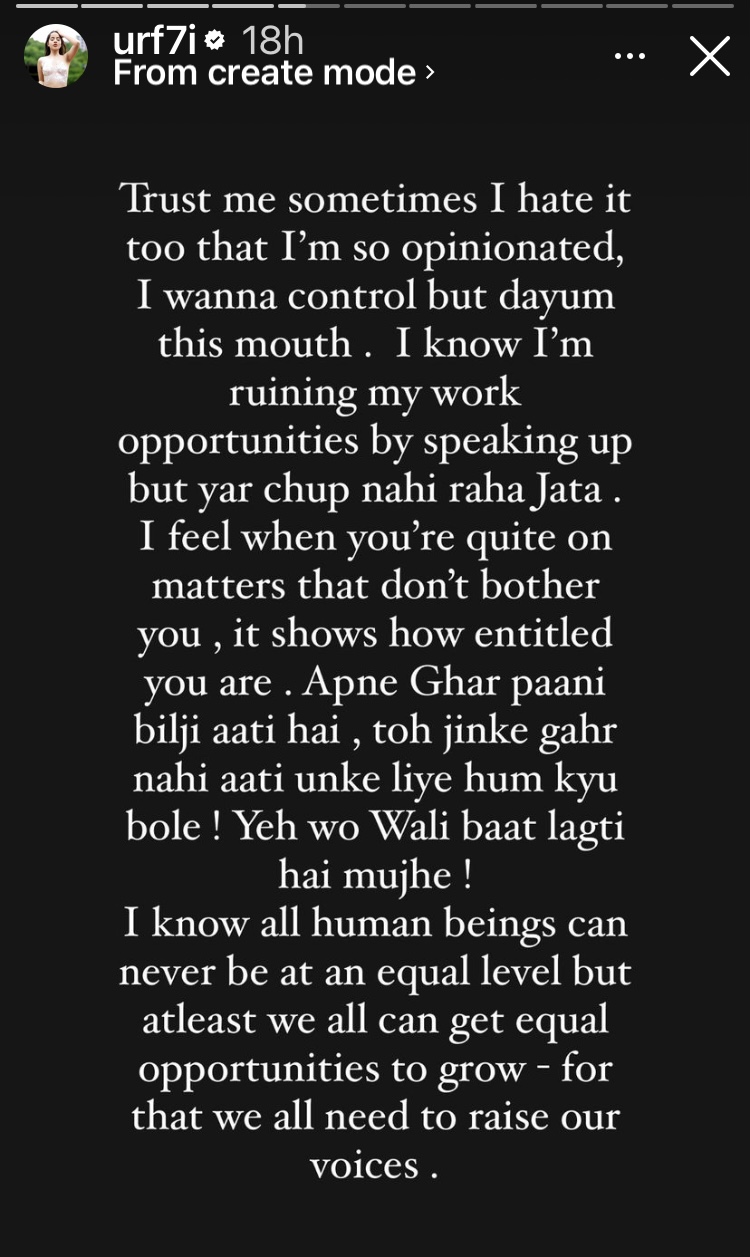 Earlier, Urfi Javed had expressed her intense disappointment towards the makers of Bigg Boss 16 and singer, Shehnaaz Gill for supporting alleged women molester, Sajid Khan. Ever since Sajid participated in the nationwide popular show, people are fumed to see him on their television screens as he was accused of #MeeToo allegations in the past by many celebrities and models. Like many others, Urfi had also shown her disappointment and penned a note in her IG stories. She had written:

“Can we stop praising this sexual predator!! Gosh you all are making him a hero! He’s an a%$hole! Kya script ke through hasaya isne? His films are cringe AF! Or real life mein toh isne na jaane kitni ladkiyo ko rulaya hain!! We can’t forget that!! If women like Shehnaaz Gill, Kashmera Shah are free to support a sexual predator, I’m free to criticise him and both of them too!!” 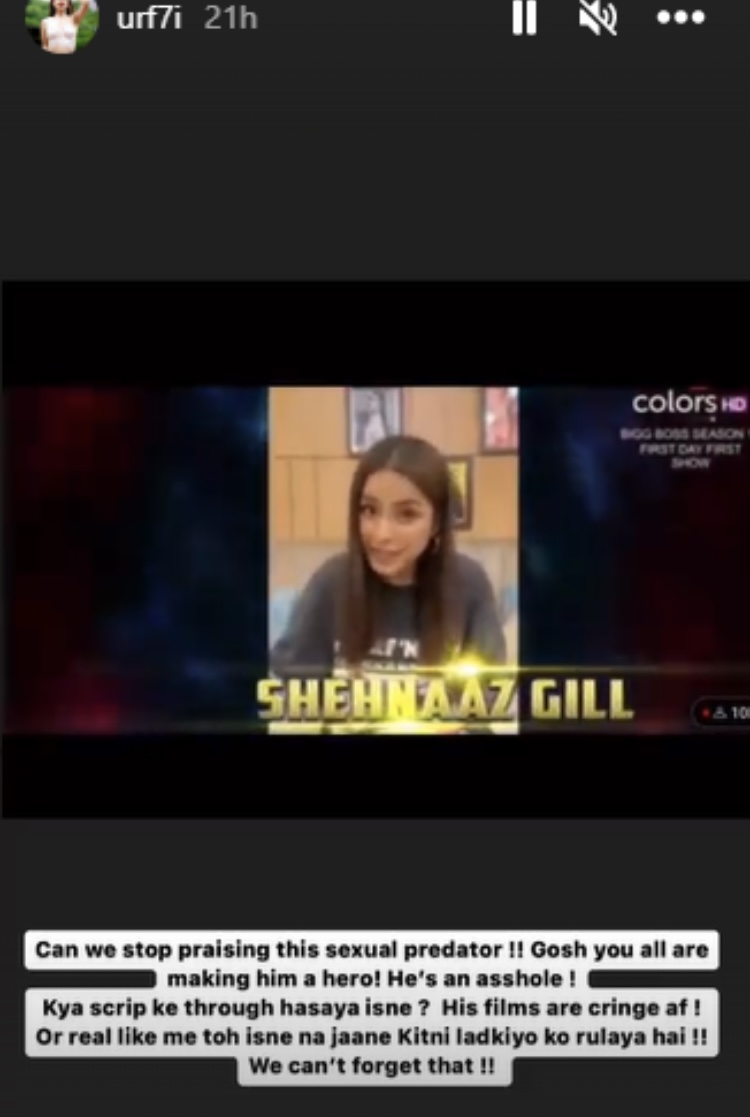 On the personal front, Urfi Javed is rumoured to be dating her ex-boyfriend, Paras Kalnawat.