One of the most sought-after couples in the entertainment industry, Riteish Deshmukh and Genelia D’Souza never miss a chance to set some pure couple goals with their drool-worthy glimpses. For the unversed, they tied the knot in 2012 and are blessed with two adorable sons, Riaan Deshmukh(2014) and Rahyl Deshmukh(2016). Since then, the doting parents being avid social media users, keep sharing cutesy moments of their lives.

For instance, on June 15, 2022, Genelia Deshmukh had hosted a Q-A session on her IG handle, and her fans didn’t miss the chance to ask her several questions about her personal life. One user asked her about the best gift that she had received from her hubby, Riteish Deshmukh. To this, Genelia posted a picture of her two little munchkins, Riaan and Rahyl. Another fan asked her, “What’s your mobile wallpaper?” and the diva shared the screenshot of her lock screen, which had featured her along with Riteish and their kids.

Also Read: Katrina Kaif And Vicky Kaushal Twin In Yellow As They Arrive At Arpita Khan’s House For Ganpati 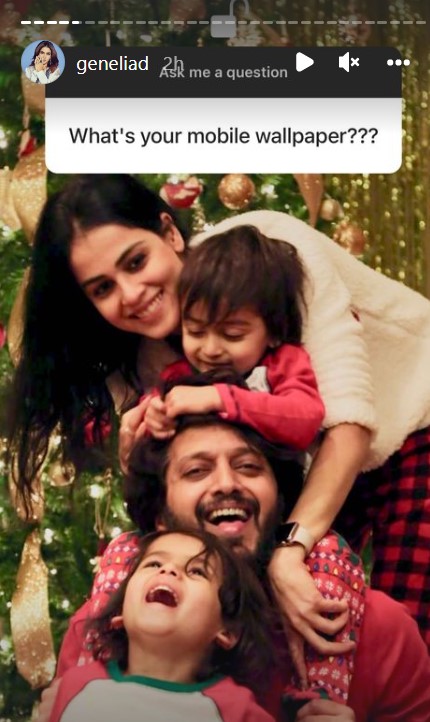 On August 31, 2022, to mark the auspicious festival of Ganesh Chaturthi, Riteish Deshmukh and Genelia Deshmukh brought home an expensive BMW car. They were spotted outside their home along with their kids, Riaan and Rahyl donning all-white ensembles and looked simply stunning. Check out their glimpses:

Riteish and Genelia are indeed doting parents, and glimpses of the same are found on their respective IG handles. For instance, on April 23, 2022, Riteish had taken to his IG handle and shared two pictures with their kids, Riaan and Rahyl, from the cricket stadium. In the pictures, the daddy, along with a bunch of kids, including his sons and their friends looked super happy while posing for the lens. Sharing the priceless moments, Riteish wrote, “Daddy duty at the @ipl20 #Riaan #Rahyl #Avir #Shlok @dypatilstadium.” As Riteish shared these pictures, his loving wife, Genelia instantly took to the comment section and praised all the boys present in the beautiful picture. Genelia’s comment could be read as: Even after being adorable parents, Riteish and Genelia never miss a chance to spend quality time with each other, and their glimpses simply swoon our hearts. For instance, to mark their 9th wedding anniversary on February 3, 2021, Genelia took to her IG handle to post an adorable video with Riteish and had written:

“Dearest @riteishd, You don’t find love, it finds you, It’s got a little bit to do with destiny, fate, what’s written in the stars and a lot to do with special kind of you. There is no me without you… I’m totally madly, crazy in love you. Happy Anniversary Love.”

Congratulations to Riteish and Genelia!

Next Read: Dia Mirza Opens Up On Her Bonding With Stepfather, Ahmed, Adds Why She Missed The Security Blanket