For the occasion of Top Gun’s long awaited sequel Maverick the Swiss fighter jet specialist MiGFlug took Roberto Chevalier for a flight of a lifetime. Roberto is the Italian voice of Tom Cruise and didn’t only lend his voice to Maverick 30 years ago, but also for his comeback to the screens in Italy. 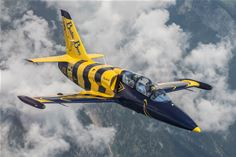 Unlike the actor, a voice double usually doesn’t take part in the action on a set and in Roberto’s case — on a jet. But how can his voice take the role of a fighter pilot without ever having experienced the real thing? That was solved with a flight available on YouTube.

Because MiGFlug’s raison d’être is to realize people’s dream to fly a jet, Roberto got offered an (ejection-) seat. Look at it as method acting, where an actor inhabits the role of his character to encourage sincere performances

Roberto took off for a dazzling 45-minute jet flight in the sensational scenery of the Swiss Alps. He was in for loops, rolls, and a flyby around the Matterhorn.

Roberto’s maiden flight resulted in a short-film-documentary. The film is carried by his voice, and talks of a dream to finally catch up with the skies. Ironically, this time it was his voice that stayed grounded as the whole experience made the actor speechless while in the air.

MiGFlug is a Switzerland-based company specializing in flights in fighter jets, founded by aviation enthusiasts in 2004. MiGFlug allows its customers to break through the dream barrier, from 14 different locations – including the US, Germany and Czechia. Safety first! MiGFlug has never encountered an incident during thousands of flights.