On a wet and windy night down on the South-East coast This Is The Kit brought a welcoming warmth into Folkestone’s Quarterhouse with their imaginative array of tender and gentle folk songs. Kate Stables and her band; Rozi Leyden (Bass), Neil Smith (Guitar) and Jamie Whitby-Coles (Drums) delighted an enthusiastic crowd with a 17 track set that perfectly showcased This Is The Kit’s impressive and immersive sound. 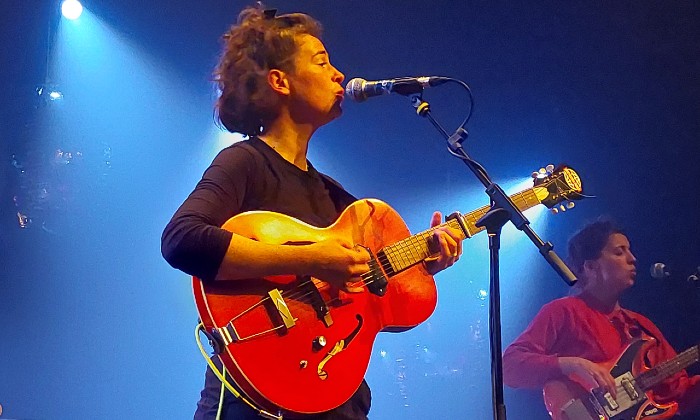 More than anything Kate said, they were “really grateful” to be on stage performing and sharing tracks from their last album – Off Off On. This Is The Kit’s sixth full length studio album was released in late October of 2020 and because of the unforeseen, but obvious hurdles, the opportunities to play songs from that album live have been limited. Thankfully, in part due to promoters Melting Vinyl and Creative Folkestone, the lucky people of Kent were treated to nine of the eleven tracks that made up the last record, plus some carefully selected additions.

This Is The Kit began the evening with the understated and delicate notes of Slider. Whitby-Coles articulate and soft jazzy inflections provided the perfect percussive soundtrack to score Stables’ beguiling vocals. Two tracks from TITK’s 2017 album, Moonshine Freeze, Bullet Proof and then Empty No Teeth, upped the tempo slightly as Kate flexed her vocal range and drew the crowd in.

After an opening quartet of songs Kate took a moment to express her clearly sincere gratitude. “I’m really grateful that you’re all up for being here, all at once, thank you, I’m very grateful” she said as she switched her guitar out for a banjo and began to perform one of the most animated songs of the set, This Is What You Did. In her socked feet and black outfit, Kate adjusted here elasticated black-and-white belt to ensure that her banjo was held close to her body before beginning her next track.

Kate’s banjo plucking, coupled with a more immediate and intense vocal, were paired to Neil Smith’s deft guitar work as TITK played out an undoubted album highlight. Stables and her band segued seamlessly from This Is What You Did into the title track from Off Off On as both she, Leyden and Smith transitioned from one song to the other.

The mid-point of the night saw This Is The Kit perform a cleverly re-worked, more energised, version of the title track to their 2017 album, Moonshine Freeze. As the band struck up the first notes and then Kate started to sing the revolving chorus – “Cycles of three, triangles are tricky”, the accompanying animation unfolded behind her to reveal possibly the most carefully matched film of the set. Kate said that – “you’re all very lucky ‘cos none of the other shows this month have the amazing artist Pete McPartlan (Excavations/Sedimentary Seven/Tesselations) doing all of his beautiful animations, this is the only gig where this is happening, so thanks Pete, good on yer, this is wicked.”

Stables dedicated Was Magician to all the wizards in the audience, “but especially the female wizards”, before delivering a compelling performance of such delicacy in her softest of voices. The opening track to Off Off On – Found Out, picked the pace back up a little before Started Again saw Kate and Rozi harmonise vocals whilst Neil Smith provided yet another standout guitar performance to match the faultless percussion of Whitby-Coles behind him.

As the evening drew towards it’s conclusion the acutely observed brilliance of Solid Grease – “they think they know they don’t know…we think we see we don’t see”, equalled the energy of Hotter Colder. Both of these tracks however did highlight the adjustments that This Is The Kit had made to adapt the songs for live performances. There were no keyboards on Solid Grease and sadly no horns on Hotter Colder which, if I’m being picky, would have made them even better than they were.

This Is The Kit closed out the main set with a great take on Keep Going after Kate thanked, literally, everyone – “thank you all for coming, it’s really the best way to spend the evening” she said before making sure which venue she was in! “This is really stupid, I’ve been here all day” she said, “and I don’t know whether it’s called The Quarterhouse or Creative Folkestone.” The crowd helped answer her query before she also thanked her band and her support acts and said – “I suggest we just slow down a little tiny bit, it’s ‘cos I’m out of breathe, ‘cos I’m so unfit, puffed out.”

After departing the stage to rapturous applause it wasn’t too long before Stables and her band were back on to perform the final two tracks of the night as a much appreciated encore. Earthquake once again showcased the musicianship of all four members of This Is The Kit before they delivered an understated and mesmeric performance of Bashed Out.

This Is The Kit were clearly very happy to be back on stage performing live in front of a packed crowd. It was a reciprocal emotion that saw The Quarterhouse audience soak up every last note of an incredibly intimate but inclusive performance. You couldn’t ask for a more likeable person than Kate Stables to lead a band through a setlist list that captured them at their live best. (The only question that remains is… if you were there, did you join Kate for a swim at Sunny Sands Beach the following morning?)