After a three year wait audiobooks are back with a follow up to their extraordinary debut album Now!(in a minute) with the release of their second album – Astro Tough. The seemingly oddball couple (think Sparks/Soft Cell/Let’s Eat Grandma) have a chemistry that translates into some fantastically individual and gloriously unique musical creations. The multi-award winning Welsh producer (FKA Twigs/The xx/Sampha/Blossoms/Caribou etc) and the Goldsmiths fine art graduate/Storm model may not be an obvious coupling but David Wrench and Evangeline Ling’s combined creativity is both magical and mesmerising. 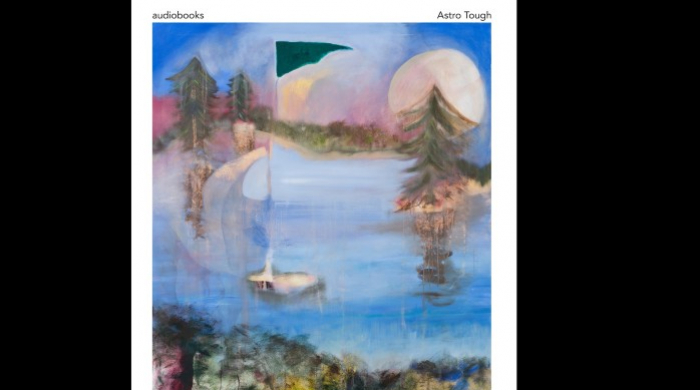 With Now! (in a minute) Wrench and Ling found their feet and tested the water, taking the first tentative steps towards producing their own inspired sound. Three years on and David and Evangeline have truly come into their own. audiobooks are no longer searching for the sweet spot they have hit upon it in the most spectacular way possible with their new ten track album Astro Tough. Astro Tough is a little less experimental than it’s predecessor but the creativity of both David and Evangeline has not been diminished, rather it has been honed and polished to produce one of the most well crafted records you are likely to hear this year.

More time has been spent on Astro Tough to get it just right, with Wrench explaining that “The first record was almost entirely first take, it was all improvised. This time we’d do that, then go back and refine it, take longer to work out parts, go back and redo some vocals. Anything that bugged us, we went back and ironed it out.” The extra attention to the details, and the audience reaction to the songs being played live, has paid huge dividends. Astro Tough is littered with quirky hooks and addictive earworms.

The irresistible combination of David Wrench’s electronic soundtracks and Evangeline Ling’s characterful vocal works throughout the album in all manner of ways. The deep bass beat of the album’s lead single, and opening track – The Doll; scored with revolving keys and a layered percussion that builds as the track progresses, works wonderfully well against Ling’s almost nonchalant vocal delivery where as the second single, LaLaLa It’s The Good Life is far more manic and energetic; shot through with a nervous and over excited energy.

Elsewhere audiobooks take their sound further towards the extremities of left field pop with the lyrically rich The English Manipulator – (“Tell me, do you like paintings, do you like Bonnard, Monnard, Manet, Monet, Monet or Manet, he didn’t even know the difference, he lectured me about Monet and Manet but he didn’t even know the difference”) and the deliberately provocative and arresting Blue Tits. Trouble In Business Class and He Called Me Bambi are tracks that see audiobooks extend their sound into cinematic territory with broader, less angular brush strokes creating a wall of hypnotic and engaging music. If it’s where they’re heading we can’t wait for more.

Evangeline Ling says, “I think this record is better than the first record, and I think we’re dying to make more. We’re going to try and better it again. I’m just dying to get back into the studio.” We couldn’t agree more that Astro Tough is a better record than their first, it’s a thoroughly enjoyable album of brilliantly constructed sound that continually piques your interest and excites your ears. An oddity of exceptional delights.