Heiko Saxo, founder of the Golden Hearts Never Die Initiative, has been creating royalist products in shapes, colors, tones and fragrances for 20 years with the acceptance of HM Queen Elizabeth II.

For the 95th birthday now a hopeful 4-minute film with the music title “Come into the land” on YouTube https://youtu.be/BaFsBWiBrH4 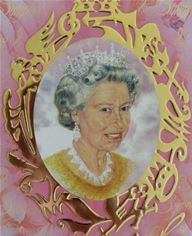 Heiko Saxo created the music back in 2001 while Queen Mum was still alive. In 2002 after her death, HM Queen Elizabeth II agreed to the production and duplication of the music CD “The Royal Symphony Golden Hearts Never Die in Memory of Queen Elizabeth The Queen Mother”.

The original painting Queen Elizabeth II (photo), created by Heiko Saxo, was auctioned by Christies in the Tipi Zelt Berlin at Kanzleramt and is now hanging in the Royal Hopital Chelsea. The proceeds went to the terre des hommes children’s aid organization.

Her Majesty’s portrait was on the Commemorative Card for the State Visit 2004, on the official wine list of the Hotel Adlon Kempinski Berlin, on over 100,000 wine bottles worldwide, on fine silver medals, on “The Royal Symphony Queen Elizabeth” and on the “Perfume Queen Elizabeth Scent of Rose” pictured. Deutsche Post produced a special postage stamp with the painting Queen Elizabeth.

Heiko Saxo created and manufactured the silver medal and later “The Royal Symphony Queen Elizabeth II”. The music was recorded with the Royal Philharmonic Orchestra Ensemble in Angel Studios London.